BCGS asked for a volunteer to contact Weyerheauser and ask for a map of their properties in Beaufort County with the cemeteries marked.  Albert Everson  volunteered to contact them.  Howard Spence with Weyerhaeuser  (now retired) returned Albert’s call and said he would take us to each cemetery.  We asked for volunteers to go with Howard.  Albert Everson Russell Tyson and Jean Gurkin accompanied Howard to each cemetery.  Bruce Hill from Maryland (formerly Beaufort County) went with us when he was in town.  Odell Parker and Louise Cowell also went with us when their schedules would allow.

Going into areas that are now in remote wooded areas, finding where our ancestors lived over a hundred years ago  and trying to imagine what life for them was like is hard to describe but very rewarding. We all agreed that this was the one most rewarding experience we have had since beginning our adventures in genealogy.

Not only is the Weyerhaeuser property gated so we could not go on it without permission, with only a map we would have never been able to locate most of the cemeteries. We only wish Weyerhaeuser had more cemeteries we could survey.  Many thanks to Weyerhaeuser and Howard Spence for making this such a memorable experience.

We took pictures of each marker and have since published it in a book, Cemeteries in Beaufort County on Weyerhaeuser Property (available from our Book Vendor).  Below are some of the pictures we took while looking for and surveying the cemeteries. 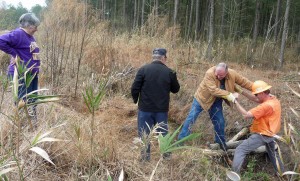 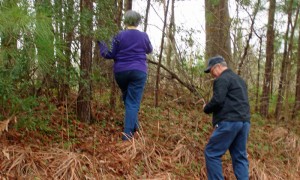 The tree grew over the marker then died. 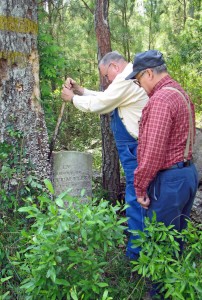 Albert decided to cut the dead tree off the marker. 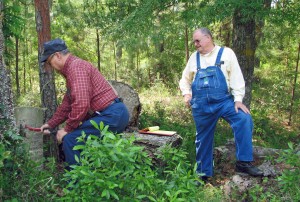 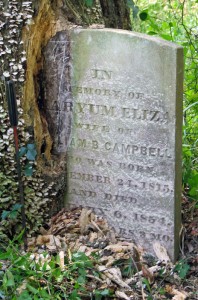 After Albert, Russell and Howard cut away the dead tree we could read the marker.

After surveying the cemeteries was completed we invited Howard to one of out meetings under the pretense that he was to be our sneaker.  He did tell the members about Weyerhaeuser and their efforts to preserve cemeteries on their property.  But after this we surprised him with a plaque from BCGS expressing our gratitude for all he did in making it possible for us to do the surveys. Howard Spence (above) displaying the plaque of appreciation from the Beaufort County Genealogical Society.