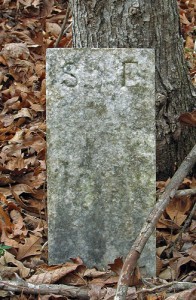 When this marker was seen by Chris Edwards while hunting he thought it was a head stone.  When he told me about it I told him I felt sure it was a foot stone and asked him to show me where it is located which he did.  I started probing around in the sunken in place just behind the marker and hit something solid.  He thought I had bumped the casket but I assured him that it was not a casket but the headstone.   He dug down a little with his hands and reveled a small portion of the marker.  We agreed to come back with tools and dig out the marker.  A few weeks passed, he got busy and Albert Everson from BCGS went with me.  We named this the Eborn Cemetery because this is the only marker we have found to date telling us who is buried here. 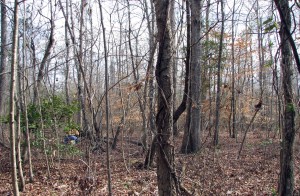 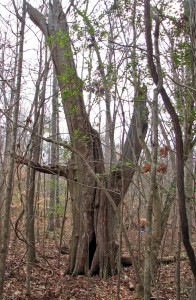 The Eborn Cemetery is located about 555 feet in the woods on the south side of Cotton Patch Road about a mile down Clay Bottom School Road in Blounts Creek.  Above is a scene of the cemetery and photo of a dead cedar tree located near the entrance to the cemetery.

We visited this site and briefly surveyed it in early spring.  Due to the time of year (snakes and ticks} an in-depth survey was not done.  However, we did count the number of graves across and down and estimate up to 400 graves could be located at this abandoned cemetery now located in the woods and almost totally forgotten.

I led Albert Everson to the location of the foot stone and the place we had determined the head stone was located.  He started clearing the debris revealing the marker. The following photos show the recovery of the marker. 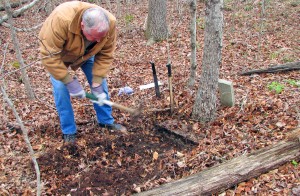 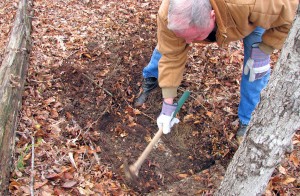 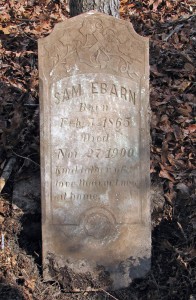 This is an Afro-American cemetery and apparently was the community cemetery for the area at a time in the distant past.  (Additional genealogical information relating to the Eborn family can be found in the June 2012, Vol. XXVII, No. 1 of Pamteco Tracings, “Who is S. E.” available from our Book Vendor or may be read in some libraries.)