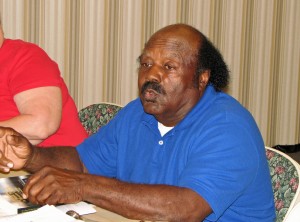 Bunyon Keys was the featured speaker at our June 2014 meeting.

MEETING OF THE MEMBERSHIP

The meeting was called to order at 7:00 pm on 4 June 2013 by President Gurkin.  We met at the Church of Jesus Christ of Latter Day Saints in Washington, NC.  The President welcomed everyone to the meeting.

The minutes of the May meeting were read by the Secretary, Chris Oakley.  A motion was made by Willene Brinn, second by Bunyon Keyes, to approve the minutes as read with the corrections.  Motion carried.

The Treasurer, Louise Cowell, gave a report for April and May.

A motion was made by Louise Cowell, second by Vernetta Lange, to not meet in July and August, 2014.  Motion carried.  There was mention to change the by-laws to say we would not meet during these months for a regular meeting.  A speaker for September could be Eugene Grant, Jr. who has done articles on Blackbeard. Willene will call him and see if he is available for September.  Albert mentioned having Stan White and Hood Richardson to speak.

BCGS will have its 30th anniversary coming up soon.  What do we want to do?  No suggestions were made, so Jean asked everybody to think about it.

Some of us will help Bunyon do the Keys Cemetery survey at Blounts Creek. Date to be set later.

Albert was approached by DSS to have BCGS help locate parents and family.  He will invite the contact person at DSS to come to the September meeting to explain what they would like from us.

Other things mentioned: Eastern NC Family History Fair & Road show with Bunyon Keyes.  We can promote our society on Sept 26th & 27th in New Bern. There will be seminars & classes.  Friday has fees for the classes.  Craven County Genealogical Society will lecture on line – mini civil war programs.

Bunyon Keyes was the speaker for the evening.  He talked about his book on the black people at Blounts Creek.  His book is entitled: Over Three Hundred Years of Black People in Blounts Creek, Beaufort County, NC, Book I, by Bunyon Keys.  He has spent over 15 years researching information for the book.  It was a very interesting presentation.  Thank you Bunyon.

A motion to adjournment was made by Russell, second by Odell Parker, to adjourn the meeting at 8:35 p.m.